An abridged version of the early history of the Stirling Pipe Band. Much of the information is as written by Pipe Major W.J. MacLeod for "From the Beaches to the Falls" - a historical record of activities along the Winnipeg River from Great Falls to Victoria Beach. 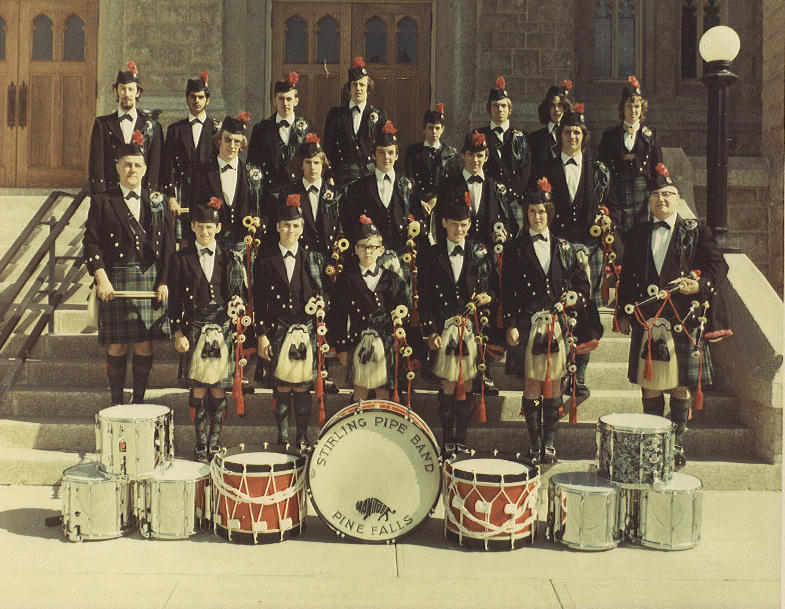 Since the days of the early settlers, the sound of Scottish Highland Bagpipes have been heard in Manitoba. In 1947, following the Second World War years, Pipe Major William MacLeod, Queen's Own Cameron Highlanders of Canada, arrived in Pine Falls, becoming the first resident piper of the town. The Pine Falls piping pupils began in September 1965 with Allister Rodger, followed by Maureen, James and William, the family of Mr. and Mrs. Ian Rodger. 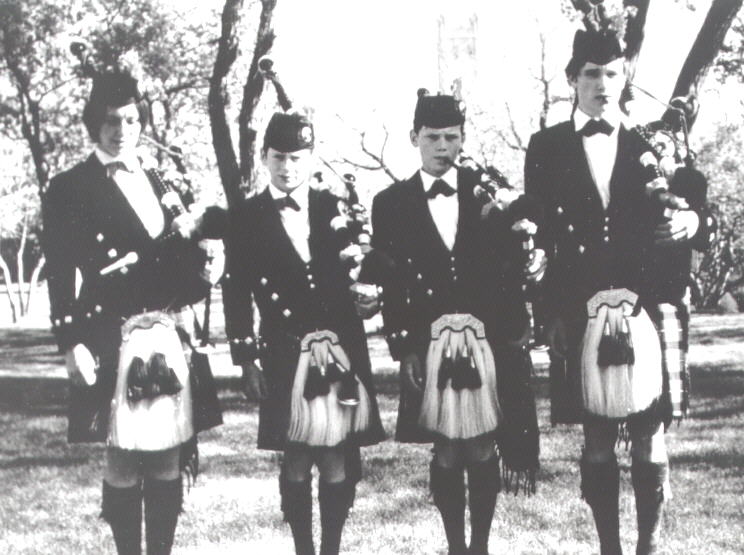 Due to several local performances of this small group of pipers, including the reception of the Centennial Across Canada Canoe Expedition at the Pipe Falls Power development in 1967, enthusiasm for piping spread to include many other young pupils.

In the fall of 1968 the pipe band was formed in Pine Falls and the first committee was elected at the home of Mr. and Mrs. John Hutchison; Ian Rodger (Chairman), Evelyn Bulmer (Secretary), and Mary Hutchison (Treasurer) - the pipe band to be known as the Pine Falls Pipe Band. 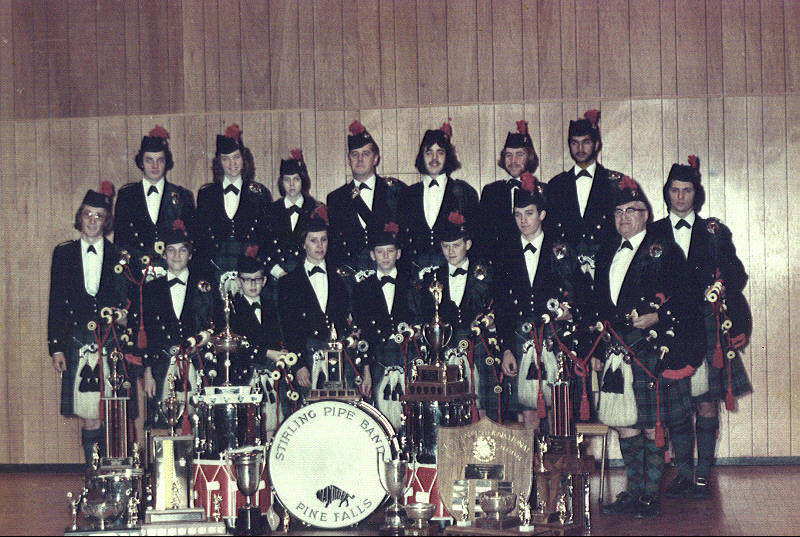 As regular practices were held each week at the Pine Falls School and additional piping instruction sessions and drumming lessons improved the enthusiastic players, they became competent solo players as well as good band members, and soon were able to play in many parades and competitions. Funds were raised and the band was outfitted with traditional uniforms in the MacLeod of MacLeod tartan - to reflect Pipe Major MacLeod's contribution.

In 1972 the title of the Pine Falls Pipe Band was changed to Stirling Pipe Band in recognition of Ian Rodger, a native Scot from the city of Stirling. As four founding members of the band were of the Rodger family, permission was requested and granted from the Royal Burgh of Stirling, Scotland, to use their official Coat of Arms and Burgh Name.

The honours received by the Stirling Pipe Band and its members over the next 20 years brought recognition to Pine Falls. The band's record of awards, as distinct as any band in Canada at the time, could not have happened without the high standard of its players and as a result solo awards were numerous. Piping awards won by Alister and Maureen Rodger exceeded 50 awards each, Jim Rodger, Bill Rodger, Ed Roy, Bill Welsh, and Hugh Peden received many similar distinctions. Geoff Bulmer, Brenda Osmond, David Osmond, Carol Bulmer, and Jeff Berthelette were consistent winners in drumming events.

As the original members of the band grew up, many relocated to the Winnipeg area. For many more years, Pipe Major MacLeod ran the Stirling Pipe Band out of Winnipeg - commuting from Pine Falls for practices - all the while gaining new members from the city. For a time, the band amalgamated with the Centennial Pipe Band of Winnipeg and were know as the Stirling/Centennial Pipe Band. During this time, the band won Grade 1 honours in Manitoba competitions for several consecutive years.

As a natural addition to the band, several local girls started to take Highland Dance lessons and over the next several years performed with the  band on many different occasions.  Organized by Irene Peden, the dancers included Heather and Audrey Peden, Colleen Coote, Moira Geer and others. Dance teachers were brought in from Winnipeg and included Delma Wilson and Malyss Gibbon. 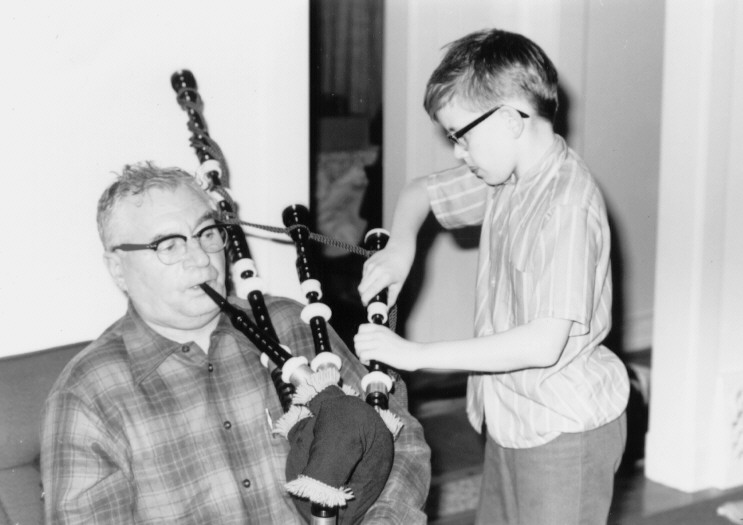 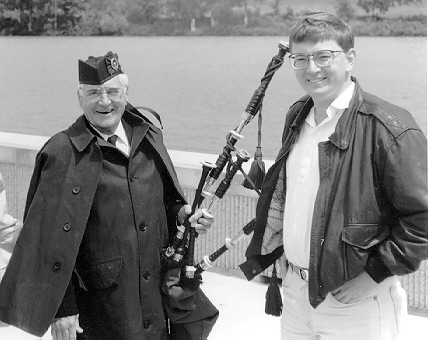 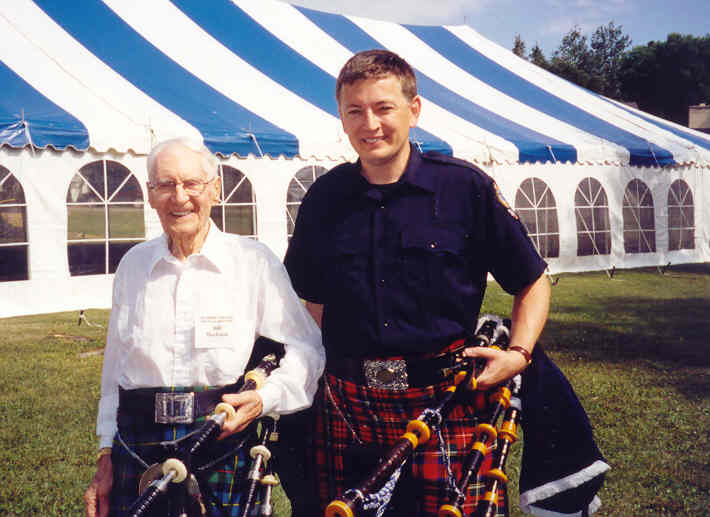 On August, 2002, the Stirling Pipe Band held a Reunion to coincide with the celebration of Pine Falls 75th Anniversary. After meeting in the Village Green the Band performed at a number of different locations throughout the weekend.

Pipe Major W.J.MacLeod, now in his late 80's, continues to pipe and teach local children in Pine Falls almost 40 years since he first started tutoring his pupils in Pine Falls. His piping skills, work with the youth of Pine Falls, and service to the country in which he became Pipe Major of the Queens Own Cameron Highlanders of Canada and served through out the liberation of Holland, has been recognized in many ways over that time, including a Good Citizenship Award presented by the Lt. Governor of Manitoba. 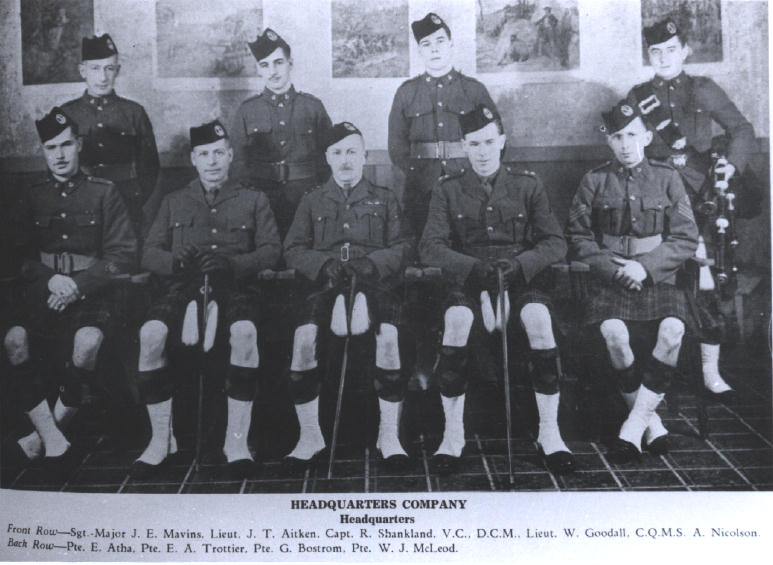 Queens Own Cameron Highlanders of Canada - Headquarters Company - 1939.  Pte. W.J. MacLeod in back right with bagpipes.

In July 1996, Bill MacLeod presented the following pipe tune to me - titled "Hughie Peden" it was written by Bill in recognition of our many memories together in piping. I have been piping since 1969 when I first picked up a practice chanter. My success, and to a large degree my enjoyment of piping, has come as a result of the tutelage provided to me, free of charge, from Bill MacLeod. In recent years my success with the Vancouver Police Pipe Band and more recently as Pipe Major of the RCMP E Division Pipe Band - can be attributed to Bill. I am proud of that fact and am happy let everyone know it.  In June 2008, Bill passed away just shy of his 94th birthday.   His memorial service was held in Pine Falls on a beautiful sunny day only a few hundred feet away from the school gymnasium that we used to practice with him each Monday night.   I have posted a copy of the Eulogy here as way to remember the many things Bill did for us as kids in that small town of Pine Falls, Manitoba.